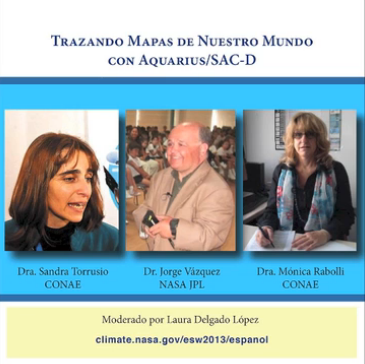 NASA-hosted Spanish-language Webinar on Mapping with Aquarius/SAC-D on November 22, 2013 (http://nasaesw.strategies.org/mapping-aquariussac-d-spanish-language-webinar/).

Aquarius/SAC-D – a joint mission between NASA and CONAE, the space agency of Argentina – was launched on June 10, 2011 from the coast of California, after being built and tested in the U.S., Argentina and Brazil. Its primary scientific aim is to collect data on the salinity of our oceans, revealing information relevant to ocean circulation, the water cycle, and climate. The observatory also includes seven other science instruments and technology packages built by CONAE and the space agencies of France, Italy and Canada.

Over 85 participants from around the world went behind the scenes of this international mission with Sandra Torrusio, SAC-D principal investigator at CONAE, Monica Rabolli, SAC-D deputy investigator at CONAE, and Jorge Vazquez, oceanographer at NASA’s Jet Propulsion Laboratory. After an overview of the development and operations of the satellite, the presenters led the audience on a journey to discover how Aquarius/SAC-D data can be used to map ocean and Earth processes – from the forest landscape of El Impenetrable, and the habitat of an endangered dolphin species, all the way to Antarctica.